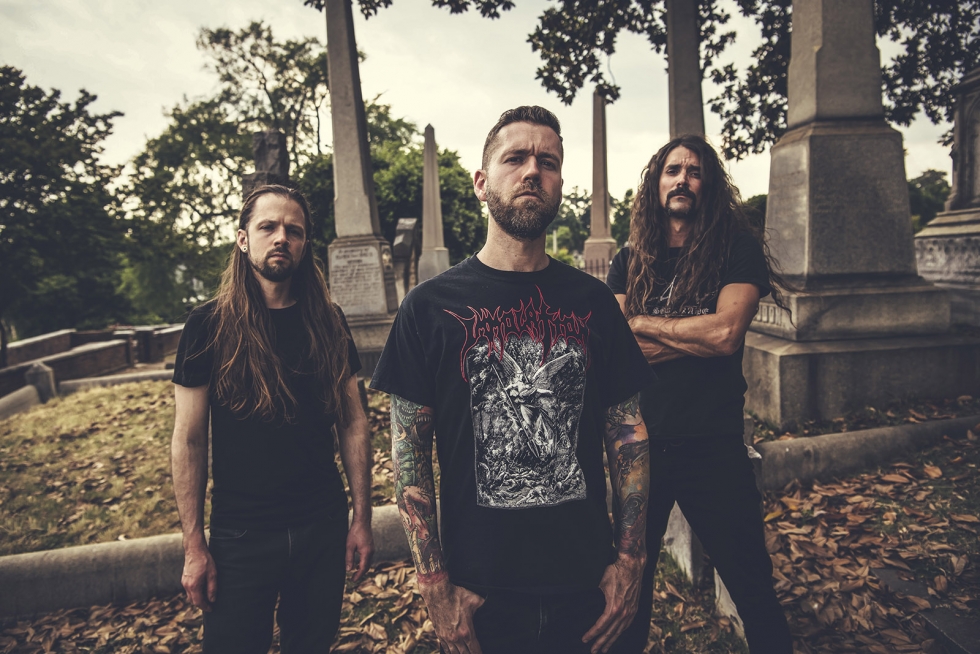 Pushing both the death metal and progressive elements of their signature sound harder than ever, The Outer Ones represents Revocation at their boldest, most aggressive and most complex. "I knew that I wanted to go in a darker direction, and this is our most death metal album to date," states vocalist/guitarist Dave Davidson. "Sometimes when death metal bands go down the prog route they lose some of that edge, but we wanted to keep the aggression at the forefront of what we do while still pushing our boundaries." Moving away from the societal and historical themes that informed 2016's Great is Our Sin, this time Davidson has immersed himself in the fantastic, evoking one of the great writers of the sci-fi/horror genre. "The title is my ode to H.P. Lovecraft and the entities of pure cosmic horror that rule that universe he created. Since the new music we were writing was so evil and spacey in sections it seemed to be the right title to fit the overall vibe. But while the lyrical content is largely influenced by such writings, in every allegory there is of course some reflection of the real world, so I enjoy writing in a way that could have one overlaying meaning and then another deeper, symbolic meaning as well."

While the four members of Revocation - Davidson, guitarist Dan Gargiulio, bassist Brett Bamberger, and drummer Ash Pearson - are spread around North America without the convenience of being able to jam, this does not impinge on the creative process. If anything, this ensures that they make the most of the time spent together, and they maintained an even greater level of quality control than on The Outer Ones predecessors. "The songs came together pretty naturally, however, this album has the most revisions to riffs and song structures that we've ever had. I had a lot of material written, and had a good amount of time to work on it between tours, so I used that time to really dissect every part of each song. I might be feeling one riff one day and then the next day have some sort of revelation and would go in a totally different direction. All of those revisions definitely benefitted the final product." True to Davidson's promise that it is their most death metal release, its abrasiveness is evident on first exposure to both devout followers and those new to Revocation. Destroying all comers with opener "Of Unworldly Origin", the fury that seethes through this and the tracks that follow is palpable, and much of it makes for deeply uncomfortable yet always compelling listening. A potent uneasiness bleeds through the swirling, slashing violence of the title track, while the unrelenting edginess and creeping threat of "That Which Consumes All Things" marks it as one of the most demanding yet essential additions to Revocation's arsenal. "I think that that element is a natural product of where I'm at as a musician," Davidson says. "I love the sound of dissonance, and as a songwriter for a metal band I can really play with different textures of tension and figure out how to achieve unexpected releases of that tension. Dissonance doesn't mean that it can't also be melodic, so I always try to think about that when composing. Given the dark direction I wanted to take the album in, it made sense to explore more abrasive harmonies and textures." In many ways, these harmonies and textures draw from jazz as much as they do metal. When not focusing on Revocation, Davidson in fact devotes much of his time to studying the language of jazz, and the influence of this is more prominent than on their previous records. While this contributes to many of the record's more coarse elements it also results in moments of sublime melody, and no more so than on the towering instrumental "Ex Nihilo". Furthermore, those drawn to the more epic tendencies of Revocation are certain to not be disappointed by The Outer Ones, and ambitious closer "A Starless Darkness" takes influence from a variety of sources but ultimately stands in a league of its own. "When it was coming together I knew I wanted to make it the album closer. The intro/outro is influenced by Gorguts and Morbid Angel, other parts were inspired by Ihsahn's writing on his solo records, especially the verse riff with the shifting contrapuntal guitar octaves. When the bridge section hits it sounds like something that could be on 'Chaos Of Forms' (2011), and then it kind of reminds me of Megadeth, but if 'Rust In Peace' was more of a death metal album."

While other heavy bands who demonstrate their devotion to the works of H.P. Lovecraft in their lyrics struggle to truly evoke the spirit and atmosphere of his works, this was not an issue for Davidson. For example, drawing influence from the short story "The Dreams In The Witch House", as well as other folklore surrounding witches and black magic, "Of Unworldly Origin" is "essentially about an individual who is tracking down a sorceress to finally put an end to her witchery, but ends up getting hexed and driven insane by her magic." The short story "The Colour Out Of Space" provides the inspiration for "That Which Consumes All Things", a unique inclusion in the author's canon in that rather than an actual monster, the creature of the story is an amorphous living cloud that devours life. "I thought a dark ethereal force that drains the life of all beings would be perfect fodder for a metal song, plus the verse riff sounds like a black cloud descending upon a village. If music can conjure a specific image it's best to try to represent that in the lyrics as well, to make an even stronger statement." Not every track draws such direct influence, and "Fathomless Catacombs" is a tale of Davidson's own creation. "It's about three grave robbers that break into an old cathedral in search of riches in the crypts below. However, the tombs are cursed and damn anyone that disturbs them to an eternity of wandering the cryptic labyrinth." Suited to the epic feel and scope of the music, "A Starless Darkness" goes beyond the sci-fi/horror themes that inform most of the record, and looks instead to theoretical physics, while retaining an ultimately somber subject matter. "'The heat death of the universe' is the theory that due to dark energy and the expansion of the universe the forces of gravity will eventually become undone. Over the aeons, all stars will burn out and then even black holes will eventually evaporate, leaving the universe frozen and lightless forever."

With producer Shane Frisby (The Ghost Inside, Bury Your Dead) tracking the drums at Brick HitHouse and longtime collaborator Zeuss (Hatebreed, Bleeding Through) handling all other aspects of recording at Planet Z, the record came together easily. "There wasn't too much input necessary, since we already had the songs mostly fleshed out, but it was good to have them as tie breakers if we had a couple different ideas in mind for one part. They were more there to give us feedback or to encourage us to try different things, like with vocal delivery or things of that nature, and it was great working with them." While legendary guitarist Marty Friedman contributed a solo to "The Exaltation" on Great Is Our Sin, this time around the work is entirely the province of the four members, not requiring anyone else's input, and they are determined that The Outer Ones is the record that once and for all establishes them as a headlining band. "We had so many great support offers from the likes of The Black Dahlia Murder and Cattle Decapitation, we didn't get the chance to headline on the last cycle. With this album, we're coming right out of the gate with back-to-back headline tours with full production. We want to really give our fans a show, and we're looking forward to fulfilling that goal."